How Learning Improv Profoundly IMPROVED Me 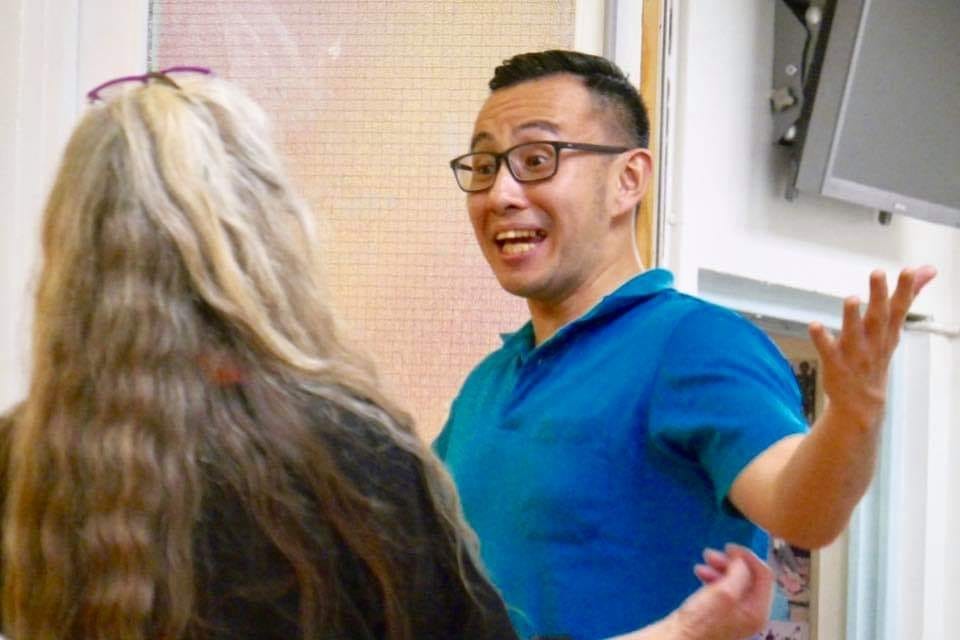 I tried to speak, but nothing came out from my mouth…

How could this be happening to me? I hate this feeling!

Yet, there I was, facing my 2 partners on stage, and staring at my fellow classmates, speechless.

This was the scene at an Improv Workshop I attended recently in London, and the teacher is the World’s Reputed Improv Theatre teacher, Keith Johnstone.

As I returned to my seat, I was brought back to the time when, as an awkward child who stuttered badly, I was often bullied by classmates. Coupled with my lack of social skills, it made for a childhood of loneliness.

As a result of those early experiences, what I’ve prided myself on more than anything else, is eloquence. I craved to be understood, liked and accepted by others. I’ve worked hard to develop eloquence, and was ever eager to take opportunities to prove myself.

As I kept replaying the scene over and over in my mind, I was so embarrassed that I actually wondered why I’ve even placed myself in such a situation. That was when I reminded myself of my objective, that I’ve wanted to do this for my own growth, to rediscover a part of myself that I’ve forgotten.”

This article summarizes the deep realizations about myself from this deeply powerful experience. In the process, there were several deep conditioning within me that I had to let go of, before new lessons can be internalized.

Realization #1: I Was Always Trying to Have T (Smart) Answers

Going back to how I was beating myself up for struggling for words, I realized I was actually fighting back my shame of having appeared silly. I may have been bullied back in school, but in that moment nobody was judging me. I was carrying those classmates’ voices, and using it to shame myself.

My eloquence has served me well in many situations, in fact, I make a living by being eloquent, teaching people how to be eloquent. However, a tool, when overused can become a defence mechanism. My eloquence had become my shield, protecting me from the fear of looking stupid.

I am generally a person who wants to build a connection with others, but I can’t help but cringed at the thought of the number of times I must have walked into a room trying to prove myself to be The Smartest Guy with the best answers. That would have made me instantly unlikeable and turn people away.

The Antidote: Communicate to Support Others

One of the key tenet of Improv is to make your partner look good. This is a simple yet profound paradigm for me. I’ve to admit as a professional speaker, I’m more used to being alone on stage addressing an audience. I prepare my speeches painstakingly and I genuinely want to make a connection with the audience.

Speaking alongside a partner on stage without preparing changes that completely! I have to embrace the dance of allowing my partner to lead with what he/she says, and I follow with a supportive line, and yet allowing what I say to lead him/her. This exchange of leader-follower-leader dynamic is so subtle that when done well, it can look like a very smooth scene on stage that’s enjoyable.

I needed to learn to pause and process what my partner said, and then respond rather than react. How often in conversations have we reacted (or overreacted) without due consideration to what exactly was said? Just by learning to pause and respond supportively, I will become a much better communicator and leader.

Realization #2: I Don’t Take Failure Well for Fear of The Loss of Face

When Keith was debriefing another activity, he shared this piece of wisdom:

“When you make mistakes and fail, people like you more because you’re more like them, and they can relate to you. However, nobody likes to see someone who makes a mistake and beat themselves up over and over. When you make mistakes but maintain a positive attitude about learning, you demonstrate you are a good-natured person, and that’s what draws people to you.”

This hit me. Hard!

I’ve been brought up in a family who’s been focusing on performance. When I was in school, my mother always drilled into me the importance of performing well. I didn’t only have to pass, but I have to always come in among the top 2 students in class. I’ve always been striving to meet the expectations of success as defined by my parents, my teachers and bosses. I’ve thought that I have learned to let this go, but my need to always prove myself has reared its ugly head again.

The Antidote: Learning to Fail Gracefully

As if reading my mind, Keith continued:

“If you fear, you will become less talented because you will not even attempt. Those who take risks and attempt going into a murky uncertain future will eventually learn and grow. In martial arts, you will not be taught anything interesting until you first learn how to fall properly. In theatre, they should not allow you on stage until you’ve learned how to fail gracefully.”

This reminds me of all the things I have ever learned, French Language, public speaking, sports, I’ve given myself permission to fail initially and learn from them. Most of my classmates there have years of experience in theatre and improv, some are even teachers of improv, some have even directed plays. However, everybody were also there to learn.

As a beginner in Improv, I can go into it with the license to make mistakes, to adopt the “beginner’s mindset.” In fact, even if we’re experts in any domains, if we approach them with beginner’s mindset, we can always learn new perspectives and ideas.

Embrace the beginner’s mindset, learn to fail with grace.

Realization #3: I’ve Been Playing TOO Nice

I volunteered to play a scene with a partner, and we each have another person who will play the role of our “Shadows.” My shadow has a list of action that he can refer to and shout out for me to perform. For example, some of the actions were:

To these commands, I can either demonstrate them on stage or say “pass!”

As I act out the scene with my stage partner, if I am stuck anywhere and do not know what to say or do next, I can say “more!” And my shadow will read out the next action.

Whenever I am stuck on stage, Keith would say to me “Ask for a command, Coen! Say ‘More!'” And so I kept asking for commands, but my shadow kept shouting out more commands which were not helpful for the situation.

The actions were supposed to be helpful, but as I struggled to perform them, I was totally lost and frustrated!

Keith paused the activity and asked me, “Did you like the commands be gave?”

I shook my head.

Keith let out of deep sigh and said, “If so, why did you not shout ‘pass’ and ask for the next command?”

This was an aha moment for me. As Keith debriefed the activity, he made an observation. Although the role of the shadow was to support us, we often “play nice” and just go along with the ideas, even though they do not bring the best out of us.

I recalled the number of times in my life when I had quietly reluctantly accepted the ideas and agendas of others, only to sulk privately and build up resentment towards them. How often have we had someone constantly in our ears with commands, ideas, advice, all in the name of “just trying to help” but which are actually not helpful? You may even experience it as your parents’ expectations, your bosses’ nagging or your spouses’ criticism that just annoy you.

“Stop playing nice! If the ideas don’t light you up, say ‘pass’ or ask for another one!”

The Antidote: Speaking your Truth Beautifully

Since attending the program, I’ve noticed that I’ve been more willing to say No. However, my number one value in my life is to maintain the relationships I’ve built, so I’ve found ways to say my truth (“No”) but in a more tactful way. Recently, I’ve wrote to a training provider to reschedule a couple of my public workshops I’ve had scheduled in two months’ time, because I have received an overseas training assignment during the dates. I received an email reply that rapped me for making “last minute changes” and how this will inconvenience them tremendously. I was incensed, and my initial response would have been to fire back an angry email, or to just quietly accept it. Neither of these options were what I wanted.

I have to speak my truth while still honour the working relationship with the training provider, which I treasure. Therefore, after I composed myself, I replied with an email that started by stating how I treasure the relationship and there’s no way I would want to jeopardize it in any way. I also acknowledged the inconvenience it caused, though I wouldn’t want to do it deliberately. Finally, I stated my case why I think that “two months” notice is adequate, especially since they’ve not been confirmed yet, and that often times, I’ve had workshops cancelled because last minute cancellations causing the class size falling beneath the minimum of five. If that has been done TO me, then certainly my request is not unreasonable.

The training provider relented, and agreed to concede to my requests.

I have the ability to speak my truth in a tactful manner, but it all starts with me being self-aware and willing to say “No.”

So what do these lessons mean for me?

In my journey towards becoming a more Authentic person, to be able to express my true self more courageously, I have come to learn Improv. As a professional speaker, I placed myself into an unfamiliar situation to learn important skills.

What I’ve uncovered and learned about myself from the experience was way deeper than I have expected. There were several more lessons and skills I’ve learned that extends way beyond what I can write about in this article. As I internalize the lessons and implement them, I can take myself less seriously, have more fun and joy in my life and work! In my position as a professional educator, influencer and teacher, what a joyful gift that is!

Posing with the Certificate and Keith’s Books with the man himself, Keith Johnstone

The Class Photo! There were participants from U.S.A, Germany, Norway, Italy, France, Switzerland, Belgium, Japan, Israel, Singapore, Lebanon and U.K in the room!